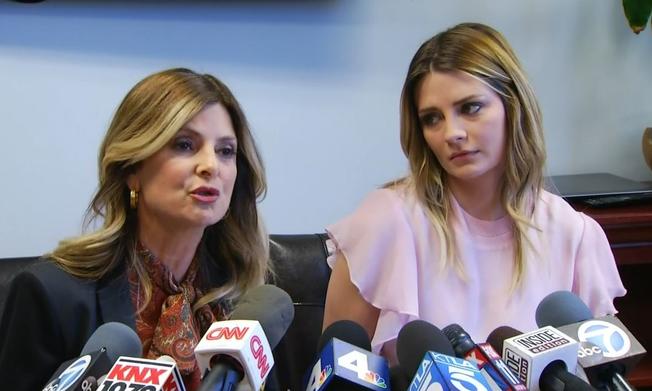 On Monday, Mischa Barton and Lisa Bloom appeared in Los Angeles Superior Court and reached a settlement, under which Zacharias agreed not to distribute any of the images and to turn them over to the starlet. “COURT VICTORY today with Mischa Barton,” Bloom tweeted, with a photo of herself and Barton smiling outside of the courthouse. “Distribution of the explicit images banned, ex stays 100 yards away forever.”

“Today we have won an important agreement, which permanently blocks the dissemination of these images,” Bloom said in a statement. “All explicit photos and videos of Mischa must be handed over to me immediately. Her ex must stay 100 yards away from her today, tomorrow, and forever. And the court will retain jurisdiction over the case in case we need further enforcement.”

“I am proud to declare victory for Mischa,” the statement continues. “She did this not just for herself, but for all women and girls. Mischa wants everyone to know that we have the right to control our own bodies and decide whether or not to have explicit photos out there for the world to see. If a woman wants to do that, fine. If she doesn’t, fine. The choice is hers and hers alone.”

Reports surfaced in March that a sex tape (of Barton and her ex, with whom she was “in a brief relationship” that has since ended) was allegedly being shopped around to pornography companies. Mischa Barton alleged that Zacharias recorded the former couple while they were having sex, as well as took photos of her while she was nude, without her knowledge. The suit added that her ex was trying to sell the tapes for $500,000.

Barton quickly retained Bloom, who issued a statement on behalf of the actress on March 15, announcing that they plan on prosecuting the alleged “revenge pornography” peddler under “every available civil and criminal law.”

“I came forward to fight this not only for myself, but for all the women out there,” Barton said. “I want to protect them from the pain and humiliation that I have had to go through. No woman should have to go through this and I am beyond grateful to Lisa Bloom, the Bloom Firm and to all of my friends who have helped me through this horrific experience. It is a very hard thing to do but I am glad that I am finally standing up for myself.” Speaking with Dr. Phil McGraw on an episode of The Dr. Phil Show in March, the actress said her former lover was aiming to ruin her through what she called “complete emotional blackmail.”

“It was a crime. It is a serious crime to tape people without their knowledge like that and I had made the mistake of putting myself in the situation with the person so I just removed myself as quickly as I could, and then it just continued to be complete emotional abuse after that for the last several, several months,” she explained.