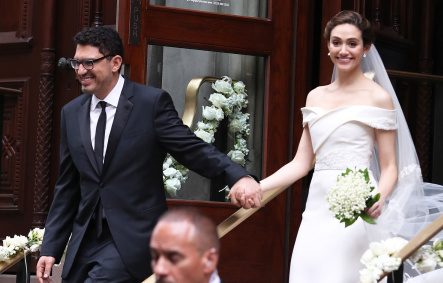 The couple began dating in 2013 after Rossum starred in Esmail’s first full-length film, Comet. The couple got engaged in August 2015, and a month later, Rossum told E! News’ Marc Malkin that she was in no rush to make it down the aisle. “We’re just chilling for a hot second,” she said, adding that she was “just not sharing” details with her family or friends.

Esmail wasn’t very concerned with wedding prep either, so the couple decided to hire a wedding planning team to oversee their big day. “Weirdly, I feel like so many times in my life are about dressing up for a film premiere or for a fashion show, so this is the one kind of time in my life where I’m actually not that focused on details,” Rossum said.

Rossum, who was previously married to Justin Siegel from 2008-2009, also said that the wedding really isn’t that big of a deal for her. “The only thing that’s really important to me is that we get married and there’s some kind of party. And everything else? I won’t freak out if there’s not, like, an orange peony on the day…Like, I don’t care,” said Rossum.

If only all brides could be as chilled out as you are, Emmy. Congratulations to the happy couple!