Interview: Venopian Solitude Is The Ground-Breaking Alternative Band To Check Out 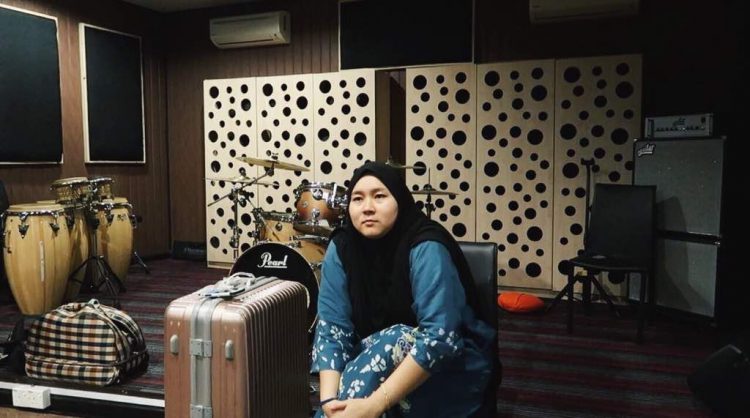 The Venopian Solitude has made quite the mark in the Malaysian music scene. Malaysia’s very own experimental electro-pop singer-songwriter, Takahara Suiko or Taka for short, is famous for her quirky songs the likes of “Tenangkan Bontot Anda” (Calm Your Behind)  and “Radical Addiction”. The band has been producing a humongous collection of music and published them on thesixtyone page, followed by Bandcamp and Youtube, which consequently garnered attention from people around the world.

In March 2014, their song titled “Hikayat Perawan Majnun” (Tales of a Lunatic Damsel), was nominated for three categories in the prestigious Anugerah Industri Muzik 2014 (AIM) as Best Engineered Album, Best Arrangement in Song, Best Music Video, and two of its members, Kemat and Taka won Best Hip-Hop Song for the hit song, “Janji” with Altimet for AIM 2016.

The experimental band has performed in various places domestically and internationally, having toured Malaysia and performed in Japan, Indonesia, Singapore, Holland and Canada.

Though many people have heard the name of the band, less people have actually heard their music. That is why this week during we’ll be talking about these anti-folk heavyweights, so that you actually know what you are in for when you see them on 12th May, The Bee Publika at Urbanscapes this year!

A: I actually started solo. Things changed when I got back from Japan. I was signed to a label, Kasi Gegar Entertainment, which pretty much gave me people to work with, who eventually became my bandmates. Over the years, we’ve had some change of members but it’s quite permanent now.

Q: How has your music evolved since you first began playing together?

A: The sound has gotten bigger and more refined. People would label our sound as anti-folk. It’s very acoustic and lyrically mocking the folk genre. I guess it evolved after learning digital audio workstation, having new band-mates and working with other people, that’s when the sound started to expand. Since everyone contribute their own stuff during the band practice, we’ve had fun experimenting with new musical tools. Our sound has always been experimental and production wise, it has gotten more detailed. Just us trying to find the right sound instead of just focusing on the melody.

Q: Could you briefly describe your songwriting process?

A: It’s very spontaneous. It used to take me only 2 hours to complete and upload a song on Youtube. Now it’ll take me from less than two days, up to a few weeks to complete a song. I don’t want to stray too far away from this new album’s concept, so I try my best to arrange the sound accordingly.

Is this how you Yoko Ono idk

Q: What’s the most rock star thing that has ever happened to you?

A: The first time we performed was actually in Japan. Actually, Aizat and Go Gerila were invited to perform, but since I was the only person who could converse in Japanese, the label invited me along too. All of a sudden, they asked me, “Hey, why don’t you perform too?” And i did. It was awesome..

Then there was this time when I went to Berlin for a music camp, and there was a club nearby called Berghain, which is notoriously known for having a strict door policy. It’s really difficult to get in, as they won’t accept just anyone to enter the club.

I heard people say, “If you’ve never been to Berghain, you’ve never been to Berlin.” Obviously I wanted in. Luckily, they had an open day thing where they open the exclusive club to public, which meant green light for me as well. It was so exciting. Guess I was the first ever tudung chick to have ever entered Berghain! I would definitely do that again, but it would be extremely hard to get back in.

Q: What’s the biggest challenge your band has ever faced?

A: Musically, we’re perfectly fine. Every practice session is a fun lab experiment. However, as of now, it’s kind of difficult to manage our time to get everyone together to complete this second album since we have our own commitments. and  On top of that, we’re constantly looking for funds to sustain our band. We all know it’s very difficult to survive in the arts industry.

Q: What’s your ultimate direction for the band?

A: Originally, i wanted the band to be like Arcade Fire. They had 13 members.

But now, I imagine my band to be an orchestra in the future. The Venopian Orchestra. 4 bassists, 6 guitarists, and you know, 10 percussionists and whatnot. There’s this one song in our new album, where the arrangement involved 4 percussionists, 2 drummers, 2 bassists, 1 guitarist, and 3 keyboard players. But since there’s only six of us, we had to divide between sets. So yeah, with the way I vision my sound, I definitely see Venopian Orchestra sometime in the future. Perhaps 50 years from now, who knows?

Q: If you weren’t in a band, what would you be doing right now?

A: If I never got involved with music, perhaps I would be an Engineer, since I was studying to be one. I would probably even pursue PhD in Engineering, if I have the patience. Let’s say if I stop music now, I think I’d opt to be a scriptwriter or copywriter. I found it interesting when I worked on a writing project two years ago.

Q: Five things about Venopian Solitude that fans should know:

A: i. People have to watch us live to fully understand our flow. We’ve been told that the crowd is captivated with the way we perform.

ii. Listen to the lyrics. Many people come up to me and say they don’t understand what I sing. Just read it again. Well, it’s not straight forward but you can simply understand when you read the lyrics.

iii. We experiment every time we practice.

iv. I personally like the practice session more than the actual event. Because everyone’s having fun, goofing off with each other, instead of being too serious focusing on not screwing up.

v. I wish one day we could perform in a circle, where audience sit around the band and see us communicate with each other while having fun. That would be awesome.

Q: Since Urbanscapes has evolved from a two-day event to three week long celebration, how do you feel about the change?

A: I feel like it could be a great thing in the future, but I have to admit that I miss the old concept.

Q: Who are you looking forward to see perform at this year’s event?

A: I’m definitely excited for Raising The Bar.

Q: What other music festivals around the world are on your bucket list to perform at?

A: Oof, damn that’s a tough question. I guess it’s a no-brainer for anyone to say they want to perform at Coachella. However, I personally prefer an intimate crowd, though our sound is so huge that it doesn’t really make sense doing it in a small space with me screaming and whatnot. Hmm, I guess anywhere then? As long as the fans are having fun, then we have fun.

Check out their latest hit below, “Tenangkan Bontot Anda” (Calm Your Arse):

The Venopian Solitude will be performing alongside Stars and Rabbit as part of the Urbanscapes 2017 lineup on 12 May 2017, 7pm at The Bee, Publika. Tickets are priced at RM58.

In case you missed it, Urbanscapes is set for a three-week long celebration, starting from the 5th to 21st May 2017.  To kick off the celebrations, HOAX Vision will present an invite-only opening party on 5th May, followed by a amazing performances from TTNG, Mylets and Cloudy Ku the next day on the 6th of May.

Cigarettes After Sex will share the stage with Ulrich Schnauss (live) + Nat Urazmetova (visuals) on 9th May, while Mew will set their foot in Malaysia once again on 10th May, performing together with The Trees & The Wild.

The rest of the slate is equally eye-popping, with our favourite experimental band The Venopian Solitude taking the stage with Stars and Rabbit at The Bee, Publika while Jin Hackman as well as the RTB Crew, Dan Shiv, Airliftz and Kidd Santhe will raise the bar at Urbanscapes House on 12th May.

On top of that, hyukoh and Crystal Castles will perform at the #UNCAGEMUSIC BLOCK PARTY on 21st May, an exclusive invite-only party. Curious collectors and connoisseurs can head over to Urbanscapes House or Medan Pasar on 13 – 14 May, as you can find plenty to shop and swap at Patina by The Fine Companions, a market showcase of vintage clothing, leather works and vinyl goods.