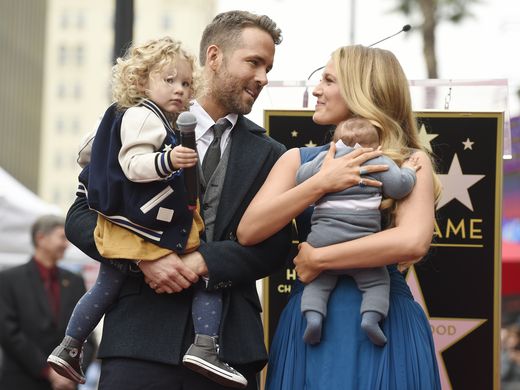 Hollywood’s perfect couple Blake Lively and Ryan Reynolds finally made their first public appearance with their daughters and their little family is just lovingly adorable. The Reynolds household made their debut at the inaugural ceremony of Ryan Reynolds Hollywood Walk of Fame in Los Angeles.

The good looking couple normally keep their daughters off the public radar, but attended the ceremony with their daughter James, who’s almost 2, and the their new born baby girl whose name is yet to be revealed.

During the speech Reynolds gave in the ceremony, he praised his wife and mother of his daughters saying, “I want to thank my wife, Blake, who is sitting right there, who is everything to me. You are the best thing that has ever happened to me, you make everything better. You make everything in my life better. You’ve given me two of the most incredible children I’ve ever hoped to have.”