‘Fast & Furious 8’ Returns To The Big Screen With A New Title! 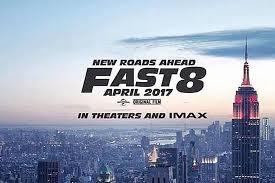 The first trailer for the eighth instalment of the Fast & Furious franchise has finally been revealed and it has been recently renamed The Fate of the Furious. (Should we go for #F8te or stick it to #F8? Hmm, questions.)

The upcoming blockbuster sequel is set to shock fans as Vin Diesel‘s character Dominic Toretto betrays his family under the instruction of villain and puppet master, Cipher, played by A-lister, Charlize Theron. In the 3 minute clip, fans can see features a slew of cars, epic explosions, and lookout for the cameo from a wrecking ball that will make you go “Oh snap, sister!”

Despite having major beef with producer and male lead, Vin Diesel, and being too busy starring in beachy scenes alongside Priyanka Chopra, 2016’s Sexiest Man Alive, Dwayne Johnson returns to the furious screen after two years of Fast 7‘s release in 2015, looking hot as ever.

The trailer starts off with Charlize Theron saying, “Your family is about to go up against the only thing they can’t handle: You,” she continues, “Did you ever think you’d betray your family the way you did today?” (Cue in dramatic music)

Now that Dom and Letty are on their honeymoon, and Brian and Mia have retired from the game with the rest of the crew exonerated, the adrenaline fuelled team has found a semblance of a normal life.

But when a mysterious woman, Cipher, seduces Dom into the world of crime that he can’t seem to escape and a betrayal of those closest to him, they will face trials that will test them as never before.