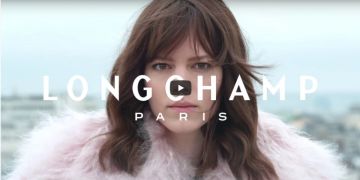 Fundamental to Longchamp’s heritage and DNA, Paris has always been a key element for all its recent campaigns. The vision presented here is of a modern, vibrant city, whose elegant perspectives and golden stone serve as a graphic backdrop to the fashion imagery of the campaign.

The film captures the mood of the print campaign, which was photographed by Angelo Pennetta and styled by Géraldine Saglio, featuring “Queen of cool” Freja Beha Erichsen as she models key pieces from the Longchamp Fall 2017 ready-to-wear and accessories collection. A free, forward-looking heroine in the spirit of Jean Seberg or Françoise Hardy, Erichsen engage viewers with direct eye contact presented as both a challenge and an invitation – the quintessential attitude of the Parisienne.