Does TikTok’s ‘Foundation In Water’ Hack Create A Non-Transfer Base?

The ‘foundation in water’ hack is beauty TikTok’s latest obsession, and we’ll be giving you ALL THE TEA on this amazing makeup hack! Let’s face it, the tropical heat will melt off our makeup regardless of how strong a setting spray or primer base is. However, this hack might just be the key to a flawless, heatwave-ready skin that lasts all day long.

It first went viral on TikTok after the account @bodywhy_official posted a video of a girl cutting open a tube of foundation and pouring it into a cup of water. The girl proceeded to give the concoction a few stirs and poured out the water, separating it from the foundation. She then applied the now ‘watered down’ foundation on to her skin like usual and blended it out with a sponge. To test its transferability, she used different objects such as a phone, a facemask, and even sprayed water on her face and patted it with a tissue, all of which showed no signs of transfer!

♬ When I Ride – Ashley Mehta

Though the original video was actually intended to show how waterproof the foundation is, many popular accounts, such as @hudabeauty, @helinndoski, and @rachelrigler took it upon themselves to replicate the hack.

“This is a technique that is supposed to give you the longest wear application, non-transfer, and it’s supposed to make your skin look more beautiful,” Huda Kattan from @hudabeauty explained.

To do this, all you need to do is give a few pumps of your foundation into a cup of water, and swirl it around. It’s supposed to add moisture without any excess oil, which will make the skin look more dewy and radiant. The reason for this is because when the foundation is in water, it separates some of the oil from the foundation!

What do we think? 😳 #makeuphack #makeup #foundation

Though most people who have tried this hack have reported positive results, such as achieving a luminous look that doesn’t transfer, some commenters were still skeptical about it, stating: “I’m confused? Is no one else seeing that it did transfer! The paper towel is orange”, and “I bet if you didn’t put it in water, it would look the same on that paper towel. Looks matte from the start”.

WILL YOU TRY? 😳 MUAs have been doing this trick to add moisture to the skin without excess oil, making the skin look dewy, radiant & long lasting (ib: @Rachel Rigler) #foundationhack #makeuphacks #foundationinwater #testingviralhack

Will you try the foundation in water hack?

More on hacks? Read this:

Weird Period Hacks That Will Change Your Life (For Real!)

Seems like your favorite minimalist makeup brand, NUDESTIX, is not holding back on their launches this summer season! They recently...

Look, when it comes to Rihanna and her groundbreaking Fenty products from Fenty Beauty and Fenty Skin, you know she... 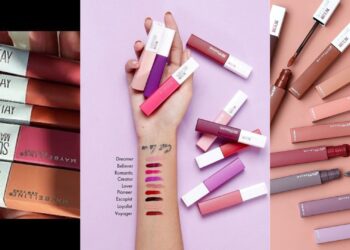 Maybelline Matte Lipsticks You Gotta Get No MATTE-R What!

A makeup product that will forever be in trend is matte lipstick. Everyone has one. It's pretty much a MUST...