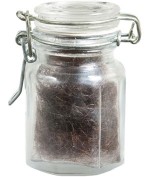 The Elvis Memorabila Auction is finally over and what else were put up for auction besides his grand piano, car, bunch of personal stuffs including a 4-page love letter and such? A collection of his hair in a jar that was kept by Elvis’ barber. Although the White Kanabe Grand Piano that was expected to sell for more than USD$1million was not sold – probably due to the poor economy – the jar of hair was auctioned off for nearly USD$17,000! In total, the auction brought in more than USD$650,000. Would anyone even pay USD$1million for a piano that once belonged to the great Elvis Presley? Maybe, someone’s even crazy enough to buy his hair.