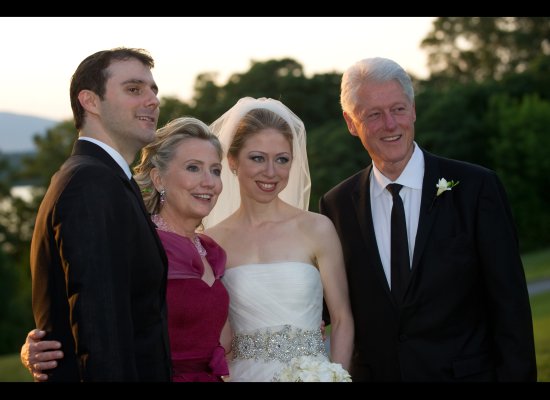 With reports of the wedding costing approximately $2 million to $5 million, former US president Bill Clinton’s only child, Chelsea Clinton tied the knot with her longtime boyfriend, Marc Mezvinsky on the 31st of July 2010.

In a private ceremony where airspace over the area were restricted, roads blocked off and workers sworn to secrecy, the wedding was held at Astor Courts, a sprawling estate along New York’s Hudson River.

The interfaith marriage honoured both elements of Jewish and Christian customs as Marc Mezvinsky is Jewish while Clinton is Methodist.

Dressed in an elaborate wedding gown by Vera Wang, Chelsea Clinton looked every bit of a beautiful bride as her father escorted her in the wedding march. According to reports, Bill Clinton was asked by his daughter to lose some weight for the wedding, and he looked dashing on that day.

About 400 guests attended the event including celebrities and politicians who were close to the family.

In an official statement by Bill Clinton, he happily announced: “Today, we watched with great pride and overwhelming emotion as Chelsea and Marc wed in a beautiful ceremony at Astor Courts, surrounded by family and their close friends.We could not have asked for a more perfect day to celebrate the beginning of their life together, and we are so happy to welcome Marc into our family. On behalf of the newlyweds, we want to give special thanks to the people of Rhinebeck for welcoming us and to everyone for their well-wishes on this special day.”

Chelsea Clinton had just completed her master’s degree in public health this year and Marc Mezvinsky is an investment banker.