Billboard Music Awards 2018: Celeb Fashion Looks We Need To Have In Our Closet Right Now 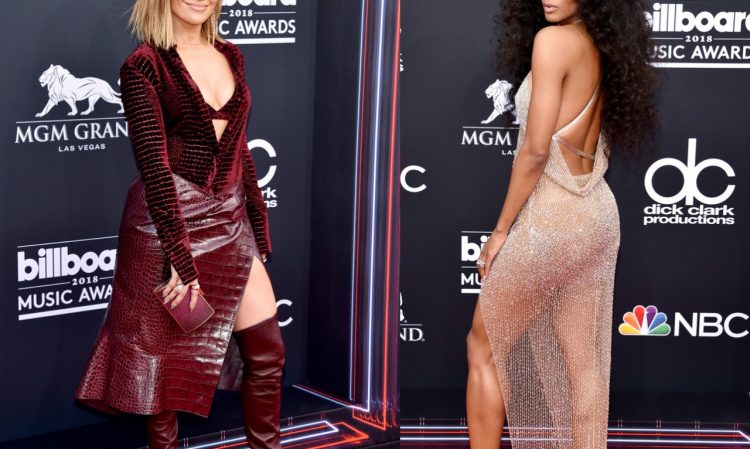 Star after star descended on the MGM Grand Garden Arena in Las Vegas for the evening’s festivities, marking the return of reigning pop culture queens like Ms New Taylor (’cause the old one is dead) and Janet Jackson back into the glitzy limelight — but what is a good award show without stellar looks at the red carpet?

Damn. Is she ageing backwards? The 48-year-old star looked stunning in an oxblood velvet shirt over a matching bra and reptile-embossed leather skirt (all Roberto Cavali) with over-the-knee boots.

Although I’m not T. Swift’s biggest fan, I can’t deny the fact that her fashion game is always fun to keep up with. The singer makes her grand return to the red carpet after a two-year hiatus in a romantic blush Versace gown with floral beading and feather detailing plus metallic ankle-strap Casadei heels and Hueb earrings.

A wise man once said that wives will usually look 10x better when her husband is dead. Well in this case, after she is divorced. The presenter debuts a chin-length bob in her black strapless Zuhair Murad leather minidress and coordinating studded sandals.

The singer looked like a goddess in her glittering sheer gown which shows skin from every angle. And her hair… ❤ Something every straight-haired people like me will always envy.

Maybe I’m bias, but I love Dua Lipa’s look last night! The “New Rules” singer donned a shiny purple plunging dress with a giant bow at the waist, which she paired with black platform sandals. One question: Is it just me or does she look a little like Prince in this metallic attire?

Who said men doesn’t care about fashion? The “Young, Dumb & Broke” hit-maker sure knows what he’s doing when he hit the red carpet in neutral-hued ensemble paired with an off-white sweater under his plaid blazer. Can Ashlee ever go wrong with her fashion choices? The long black dress with wide sleeves that she wore to Billboard Music Awards look so good that I makes me want to send this image to my tailor for Raya.. #ICYMI Justin Timberlake never APOLOGISED to Janet for ripping her top off, revealing her nipple during a Superbowl performance back in 2004 (more on that later). The superstar, who received this year’s Icon Award, made her big return to the red carpet in a princess-level ball gown skirt teamed with a simple white t-shirt and brown leather belt.