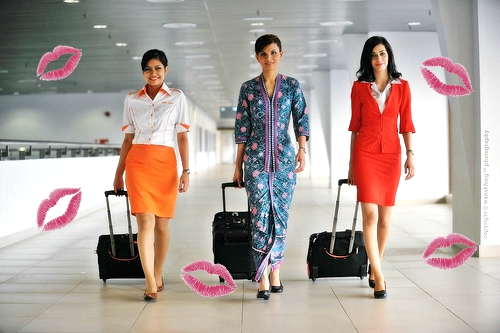 Malaysia’s budget airlines have come under fire for their “sexy” cabin crew uniforms, as two politicians from the ruling party (UMNO) criticised AirAsia and Firefly for having crew outfits that are “too revealing”.

Senator Abdullah Mat Yasim, a division chief of the UMNO party, was reported saying that the female flight attendants’ uniforms could “arouse passengers”, and that they did not conform to the Sharia Law or represent Malaysia’s official status as a Muslim country.

“The Malaysian Aviation Commission must really look into this,” said Senator Abdullah during a parliamentary debate on the MAVCOM (Amendment) Bill 2017 on 18 December.

Senator Megat Zulkarnain Omardin agreed with this viewpoint, suggesting the airlines consider redesigning the uniforms. “My wife is worried whenever I fly alone on Malindo or AirAsia,” he joked. “This is a real hassle for me.” The senator did not elaborate which areas were deemed “sensitive.” Dewan Negara (the upper house of the Parliament of Malaysia) deputy president Abdul Halim Abd Samad applauded Senator Abdullah for raising the issue, saying: “This is a good topic that many people can relate to as they always take flights.”

He also said that tourists could be given the wrong impression about Malaysia by flight attendants dressed “sexily and disrespectfully”. The AirAsia uniforms for females are comprised of white shirts, fitted red jackets and mid-thigh length red skirts with a slit up the side.

On the other hand, the Firefly uniform is a form-fitting orange dress that ends just above the knee with a slit up the side, while the Malindo outfit for women consists of a white kebaya and floor-length purple patterned skirt.

Do you think these uniforms are too sexy that it’s so hard for you to just look away when you’re not supposed to, especially at the aforementioned “sensitive” parts?

Perhaps, these politicians represent the same voices who complain about the dissatisfaction of being attended by male nurses instead of female ones (because that’s the nature of our job smh) — but that’s just my opinion.