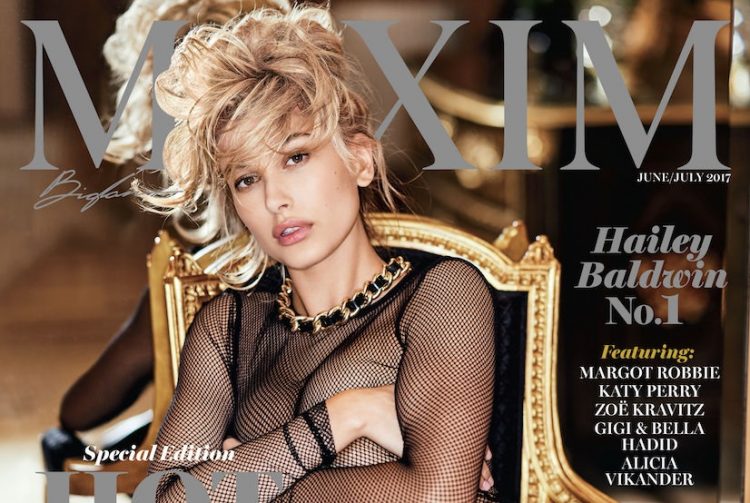 Hailey Baldwin has landed the number one position on Maxim‘s Hot 100 of The World’s Sexiest Women For 2017 and she’s featured on the mag’s latest cover, beating out BFFs Gigi and Bella Hadid, as well as stars like Margot Robbie, Katy Perry, Zoe Kravitz, and her wifey, Kendall Jenner for the honour.

Shot by photographer Gilles Bensimon, the 20-year-old daughter of actor Stephen Baldwin, whose family includes famous uncles Alec, Billy and Daniel Baldwin plus cousin Ireland, leaves little to the imagination on the magazine’s cover in a black mesh bodysuit, using only her hands, and some expert positioning to cover herself up. (That’ll show ex-boyfriend Justin Bieber what he’s missing!)

Hailey opened up to the mag about following in the footsteps of her famous family. “I honestly always feel like it was a little bit inevitable for me,” she said. “I was always the entertainer in my family. Everyone said, ‘That’s the one you got to watch out for.’”

She’s definitely a badass babe, the kind of impression you make when you have wispy blonde hair, big brown doe eyes, and those pillowy lips. When asked about her gal pals, the star remarked that she’s on her own level. Come to think of it, Hailey’s attitude might be her greatest asset. When she says, “I don’t need people’s approval,” you believe her.

number 1. 👀my @maximmag hot 100 cover shot by @gilles_bensimon thank you Maxim! If only people knew how clumsy and quirky I really am lol 🙈😇

“Thank you Maxim! If only people knew how clumsy and quirky I really am lol,” she wrote on Instagram. And FYI, Hailey is wearing an Elisabetta Franchi mesh bodysuit, Maison Ernest over-the-knee boots, Falke stay-ups, and a Philipp Plein necklace on the cover.

Unlike her celebutante friends, Hailey Baldwin, though primed for the spotlight, wasn’t tethered to it, which makes her seem.. well, normal. She grew up 30 minutes outside Manhattan, and was raised as a born again Christian, which is a grounding source for her still. “I’m quite spiritual; I go to church. Last night, I was at my pastor’s house with his wife and kids having family dinner and playing Bananagrams and board games.”

When asked about her current relationship status, she just smiles naughtily and says, “Dating is weird, but it’s so fun.”

The star disclosed about her celebrity relationships which include rumoured romantic flames, Justin Beiber, Drake and Los Angeles Laker Jordan Clarkson. “You’re never worried, ‘Are they only hanging out with me because they want to get attention or be seen?’ It can be weird for somebody who’s never been in this world before to be sucked into it.”