Thanks To Twitter, A Movie Starring Rihanna & Lupita Nyong’o Could Be In The Works Soon 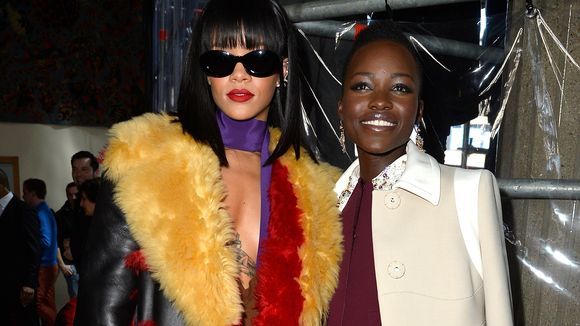 Social media has given birth to a lot of things. Sometimes they create truly hateful ideas such as the half jeans trend spotted at Coachella, but more often than not, the communication hub comes up with an idea so genius, that it might just break the internet.

Last week, an avid fan posted an old picture of Rihanna and Oscar-winning actress, Lupita Nyong’o sitting side-by-side at a 2014 Miu Miu Fashion Show, and it immediately prompted Twitter users to invent a plotline for a potential Hollywood heist movie featuring the gals.

A picture for the history books pic.twitter.com/OgxAGZMn4Z

Rihanna looks like she scams rich white men and lupita is the computer smart best friend that helps plan the scans https://t.co/PhWs1xd3nj

Just as fans started to realise that it’s probably silly to give the concept any more thought or hope, Lupita Nyong’o spotted the tweet and loved it so much that she roped in Riri! The 12 Years Of Slave starlet tweeted, “I’m down if you are.”

Unsurprisingly, it didn’t take long for Rihanna to pop on the thread. The 29-year-old Bajan beauty expressed her enthusiasm to get on board for the film by responding, “I’m in Pit’z,” coining a cheeky nickname for Lupita in the process.

I'm down if you are @rihanna https://t.co/vwHBWeCbFZ

And thanks to @dvrrxll’s brilliant idea that Rihanna endorsed with an RT, the internet has amazingly Twitter-recruited Insecure’s writer, Issa Rae and A Wrinkle In Time director, Ava DuVernay to head the project.

Both replied with their consent, in which Rae reveals she’s totally on board with the project. “Oh I’m definitely going to shoot my shot. This is an amazing opportunity and all credit to Black Twitter.”

Lights set. Camera's up. Ready to call action for these #queens. 👑 pic.twitter.com/NVgqpFeTnu

Codeblack Films, from Lionsgate, wanted in on the project as well and tweeted their deep interest in the totally made-up film, “Are you guys serious, if so, a deal can be done this week!”

Lionsgate is ready! Are you guys serious? If so a deal can be done this week!