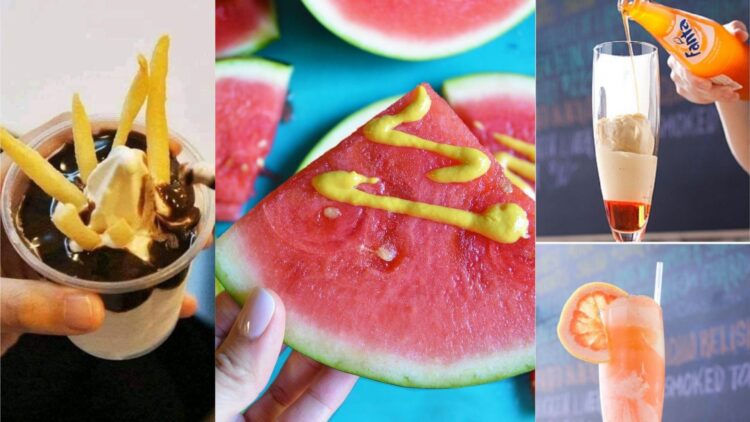 The internet is a very weird place, y’all. From bizarre hacks to disgusting facts, cyberspace never ceases to amaze me with its never-ending “information”. Some of it I wish I could unsee.

But the best ones are the weird and surprising food combos that I admit can be yummy. Hey, personally, I have never tried these, cause yo sis here is a picky eater – but I’m guessing you could do the honours and try them out for yourselves. #guineapig

I would really like to know how people come up with such weird food combos and decide to try them out – and then later claim its the yummiest food combo ever. Like, watermelon and spicy Samyang sauce? I can already imagine the taste and I’m not gonna lie – it sounds yummy. Apparently the TikTok community thinks it is!

So, get yourself a piece of watermelon and dribble some Samyang sauce on top of it, and Bon Appetite!

Yup, apparently the sauce ain’t enough – now, the peeps on the internet are trying mustard on watermelon. Not sure about the taste, but I guess the colour contrast of red and yellow makes it look good. Anyways, again, cut yourself a piece of watermelon and dribble some mustard over on top and enjoy!

If it does taste good, you can always make it a go-to snack!

YUCK! Why, people, why? Were you guys not fed properly? Anyhoo, the vanilla ice cream with soy sauce trend had been going around the internet for quite some time. Want to try? I bet you do.

Place a scoop of vanilla ice cream in your bowl and then drizzle in a little bit of soy sauce. At first, it may not taste good, but give it a few seconds, and you’ll like it. I didn’t say that – TikTok did, people. Apparently, it should taste like caramel. I don’t know about ya’ll but I’d just get myself caramel.

I mean, this one shouldn’t be bad at all. It’s pretty common to eat a sweet snack and drink carbonated drinks at the same time. But this one is slightly different. Pour yourself a glass of Sprite and soak a few Skittles in it. The colours from the Skittles should be able to change the colour of your sprite drink – and it does look yummy!

Once you get to the bottom of the drink, you can eat the Skittles that have been soaking in the Sprite. Weird, but I guess it does please the taste buds of many TikTokers out there.

Let it cook for about 4 to 5 minutes, and then enjoy!

If you have bizarre taste buds, this should taste good!

This is like the cheap version of boba. There are many things you shouldn’t consume with a Coke, but I guess peanuts just ain’t one of them. Get yourself a bottle of Coca-Cola and add peanuts to it. How much? However much your weirdo self would like.

I can’t even imagine how this could look appetizing – but I guess that’s where the world is heading these days.

Hey, out of everything we’ve seen so far, this one is pretty okay – kind of similar to an ice cream float. I actually wouldn’t mind this one. Get a glass and place in it two to three scoops (or more) of chocolate ice cream. Pour some orange-flavoured Fanta soda into the glass. Give it a good mix, stick a straw in there and enjoy!

Now this one I can confirm is yummy as heck! I mean, who doesn’t like tacos and who doesn’t eat pasta? Exactly! So, fry up some taco shells, crunchy or soggy, however you like it. Oh! Before that, cook up some pasta, or if you’re lazy like me, you can just order some. Place the spaghetti in the tacos, and take a big, delicious bite. To make it a little better, you can add some sriracha.

More on food? Read these:

BEST OF 2021: Quirky TikTok Food Trends That Were Yummm-MAZING!