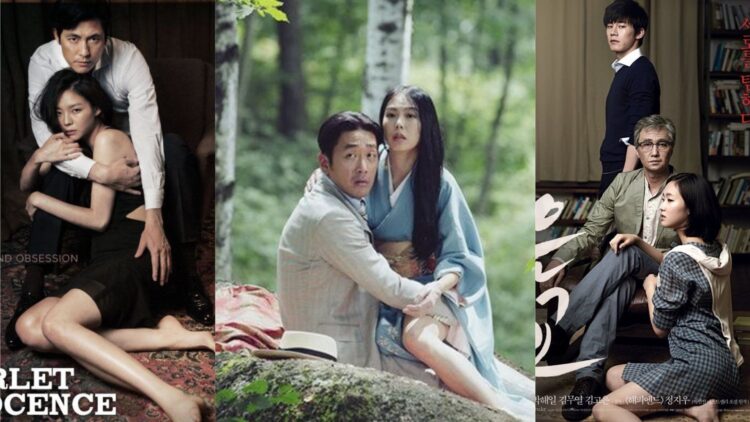 If you love smut and K-movies, then this is especially for you. There’s nothing more explicit in the K-World than R-rated Korean movies. Although we barely get any kisses till the last episode from every K-drama, K-movies are a different world. There’s a lot more action going on in Korean adult movies.

If you haven’t already entered the explicit K-movie world, then here are Korean adult movies that you must watch. So, drop what you’re doing and go watch these movies! Heads up: these might make you wet.

The title says a lot, cause everything is suspicious when you have a rich husband and then a young, beautiful babysitter. Like, what could go wrong, you ask? EVERYTHING! So, the housemaid is a story about Eun-yi who is hired to help around the house of a rich couple. Hae-Ra, the wife, is pregnant with twins and her husband, Hoon thinks this is the right time to have an affair and cheat on his pregnant wife. Hoon and Eun-yi casually start having sex – which I admit are pretty good – till one day, Eun-yi finds out she’s pregnant with Hoon’s baby as well.

However, in the midst of all this, Hae-Ra’s mother, Min-hee, notices the sickening affair going on between her daughter’s husband and the housemaid. And when she finds out about Eun-yi’s pregnancy, she does the only thing she can think of to save her daughter’s marriage and life, which is to force the housemaid to have an abortion.

Eun-yi, angered by everything that has taken place, vows revenge on the family – and the rest is for you to watch.

My, oh, my! The explicitness in this one will have you squirming in your seat. This movie depicts the ancient Korean era of just weird sexual practices between the King, his lover and the Queen. The King, played by Joo Jin-mo and his wife, acted by the beautiful Song Ji-hyo, do not have any children, which is not really a good sign for the royal family. So, to ensure the continuity of the royal dynasty, the King orders his military commander, also his lover, Hong-rim to impregnate the Queen.

What was first an uncomfortable idea soon begins to flourish into an unavoidable affair between the Queen and the military commander, which enrages the King. I mean, what do you expect when you allow it to happen in the first place? Anyways, the sex is amazing and you should go see it.

I swear, every adult Korean film has the weirdest storyline ever. And this is definitely one of them. Also known as A Muse in English, Eungyo, a teenage girl, randomly finds herself in the home of Lee Jeok-yo, a seventy year-old poet. One day, Lee Jeok-yo finds a highschool girl sound asleep on his porch chair and he becomes rather captivated by her beauty and decides to keep her close. So, he offers her a part-time job cleaning his house and every day, after school hours, Eungyo makes her way to his house.

The relationship between these two is hard to explain in words, and really, you have to watch it to understand the emotions in this film. Jeok-yo later on starts to write a story about an imaginary sexual relationship with Eungyo.

If you are obsessed with teacher-student relationships, go watch this now – but a warning, this story may not end well. This is an erotic thriller revolving around the illegal relationship between a former rugby player and a P.E. teacher at an all-girls high school. The P.E .teacher, Joon-ki, is married to Seo-yoon, who is pregnant with their first child. Joon-ki, being a good-looking mid-age P.E. teacher, is kind of used to having students flirting with him. I mean, who wouldn’t if you are a handsome P.E teacher? But Young-eun, also a high-school student there, confesses her feelings to Joon-ki after he saves her from drowning.

As much as Joon-ki tries to escape this relationship, it’s hard when he has a hormonal teenage girl who is obsessed with him.

This is the type of film in which the plot twist just blows your mind, and the steamy action blows your underwear off. Set in the era when Korea was occupied by Japan, Seok-hee is sent by a con man called Count Fujiwara (acted by Ha Jung-woo), to be the handmaiden of Lady Hideko. Count Fujiwara’s plan is to use Seok-hee to convince Hideko to marry Fujiwara and that way, he gets all of her wealth. What he doesn’t expect, in fact what you and I would never expect, is for Seok-hee and Hideko to develop an intimate relationship in the midst of carrying out Fujiwara’s plan.

Seok-hee’s feelings towards Lady Hideko so strong that she starts ruining Count Fujiwara’s plans and the ending is where the major twist is. I will keep my blabbermouth shut and not spoil it for you. You can go watch it and find out what happens – and the intimate scenes between Hideko and Seok-hee are just jaw-droppingly good.

Shim Hak-kyu is a university professor who runs away to a small town after being accused of sexual harassment. In that small town, he meets Doek-ee who is a town girl – and these two somehow get into a pretty hot and steamy relationship.

The sex in this one definitely beats the rest, if I do say so myself. And of course, Deok-ee becomes pregnant, but since Hak-kyu already has a family back home, he forces Doek-ee into an abortion, and once his name gets cleared he returns home to his family.

A heart-broken and vengeful Deok-ee seeks to take her revenge and eight years later, she gets the chance when Hak-kyu starts going blind.

More on movies? Watch these: