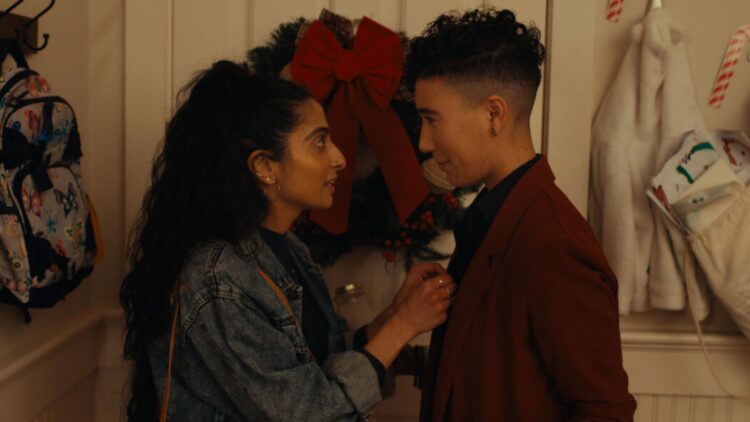 These past few years, Christmas has been spawning merry movies that indeed “make the yuletide gay”. 2019’s Let It Snow churned out a cute little queer love story that was written specially for the film adaptation of the original book. And just last year, we had Kristen Stewart and Mackenzie Davis play longtime lesbian couple Abby and Harper in the romantic comedy-drama film Happiest Season.

This year, not only do we get another queer-themed Christmas movie that offers relief from the overwhelming stereotype of white heteronormative tropes in Christmas rom-com films, but one that centers on a Queer Muslim.

The Syed Family Xmas Eve Game Night follows a queer Pakistani Muslim woman, Noor (Kausar Mohammed), who brings her Puerto Rican girlfriend home on Christmas Eve to meet the family for the first time. It just so happens to be the same night when Noor’s family is holding an annual family game night. Things take a turn when Noor’s elder sister, Soraya (Meera Rohit Kumbhani), shows up unexpectedly, which eventually leads to the couple’s relationship being put to the test. Although it’s a short film of about 11 minutes, the story delves into themes such as sisterhood, belonging, and deviating from traditional norms.

“We created THE SYED FAMILY XMAS EVE GAME NIGHT as a romantic comedy to normalize our identities on screen and to lift up the importance of joy in our experiences, something that is so needed during these times.”

According to their website, the reason behind creating the film was partly due to the fact that “Muslim characters are missing in popular film.”, and although Christmas films like Happiest Season and Let It Snow display queer romance, it is often portrayed through cisgendered characters. This 11-minute long movie takes further steps forward and truly breaks the normative barrier by including nonbinary and/or genderfluid characters, in this case, Luz, Noor’s girlfriend, played by Vico Ortiz, who very much like their character, is a proud Latine/x non-binary/gender fluid actor/activist.

From left to right: Vico Ortiz as Luz, Meera Rohit Kumbhani as Soraya, Pia Shah as Kiran, and Kausar Mohammed as Noor.

For more information, check out their store website and other socials here: