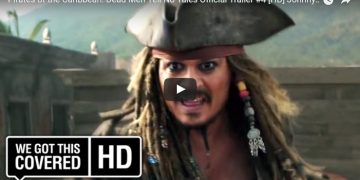 In an unprecedented move, hackers have reportedly gained access to the yet-to-be-released Pirates of the Caribbean movie, and are threatening to release it online if Disney doesn’t hand over a huge sum of money via Bitcoin.

Disney CEO, Bob Iger confirmed the news during a meeting in New York on Monday, explaining that the culprits are insisting they will release bits of the film, in increments, if their demands aren’t met. He also revealed that Disney is refusing to pay and the studio is working with federal investigators.

This news comes just weeks after hackers released pirated episodes of the upcoming season of Orange Is The New Black, with a hacker who had been holding them ransom carrying out a threat after Netflix refused to pay.

The episodes were apparently stolen during an attack on a post-production company in late 2016. At the time of the hack, only ten episodes of Orange Is the New Black’s upcoming 13 installments had been completed.

The hacker, who goes by the handle thedarkoverlord has also threatened to post unreleased TV episodes from other networks. Not cool, guys! FBI is currently investigating the incident.

Since the FBI has to track attacks backwards, it’s nearly impossible because you have various hackers from pretty much anywhere. Also, they are aware of techniques to track them down. So you could have an Egyptian hacker who uses Russian software so it looks like it’s Russian but is actually from Egypt.

The Pirates Of The Caribbean franchise has pulled in a whopping $3.72 billion in worldwide box office since first launching in 2003. It’s not clear how releasing the pirated movie would impact the new film’s fortunes.