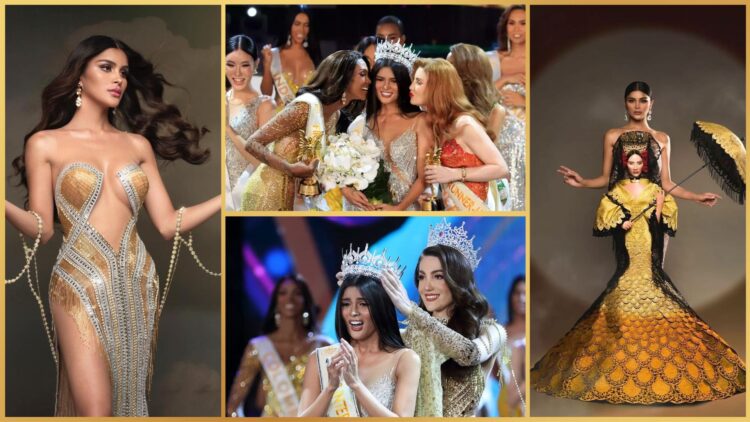 Beauty pageants are a cultural phenomenon followed by millions worldwide – and one of the standouts is a popular contest for transgender women.

Miss International Queen, the most well-known annual pageant for trans women, took place this past weekend in Pattaya, Thailand. It was considered a great deal that the nation’s queer community was able to host such a significant event in a country that had just hosted its first pride festivals, and had numerous fundamental LGBTQ+ equality statutes drafted.

Launched back in 2004, the Miss International Queen competition is open to transgender females who were born with a male gender identity. It is held annually, but due to the the Covid-19 pandemic in 2021, the event was cancelled. This year, however, the event was held to coincide with Pride Month. Hence the theme of this year’s competition: “Pride Together.” For the 2022 competition, 23 countries from the continents of Asia, Europe, North America, and South America competed in the pageant.

Obviously, there could only be one contestant crowned as queen – and Fuschia Anne Ravena of the Philippines claimed the tiara. The runners-up were Jasmine Jimenez (Colombia) and Aëla Chanel (France).

As the pageant was televised, the 27-year-old entrepreneur, from the province of Cebu, became an overnight sensation in her home country. She is the third Filipina to win the title after Trixia Maristela (2015) and Kevin Balot (2012).

During the finale on 25th June, the contestants donned formal attire and national costumes, to the delight of the live audience. During the question-and-answer session, Ravena stated that she wanted to “inspire other people” by competing as a transgender beauty queen.

“I always think that the most beautiful asset of being a human and being a trans woman is not just a head that’s full of knowledge — (it) should be a heart that’s full of love and respect, an ear that’s ready to listen and hands that (are) willing to help other people,”- Fuschia Anne Ravena

The transgender beauty queen also stated that her gender transition was a difficult one, and she credited her mother for her triumph, as her family had provided support during her transition – which she said was the best gift during the journey. Ravena was awarded 450,000 Thai baht ($12,700) in prize money, along with gifts from various sponsors.

Besides Ravena and her gorgeous national costume, many other eye-catching costumes were showcased by transgender beauty pageants from around the world. Check out some of the amazing costumes below.

Miss Brazil dressed as Nossa Senhora Aparecida, Brazil’s patron saint and guardian, who aids the faithful when they require assistance through difficult times.

This gorgeous royal attire was created in honour of Tevy, the defender of all bodies of water, who provides life on Earth with the precious resource.

Generally, owls of all kinds are frequently connected to wisdom, guidance, protection and magic. One of the rare owl species that is active and hunts during the day is the snowy owl. Because of this, the Snowy Owl may be connected to uniqueness or winter days.

Created with inventiveness by designer Randy Severiche and influenced by the immense riches of pre-Colombian goldsmithing, this costume is known for its exquisite craftsmanship and attention to detail.

The heart of the Ecuadorian Amazon is home to the hummingbird Coruscans, a magnificent animal with a thousand shades of nature’s colours. When its feathers are open, the diversity and purity of nature are highlighted. The hummingbird Coruscan is revered as the king of the mother jungle and is regarded as a messenger of men by the Amazonian tribes of Ecuador.

A macaron, or more specifically, its Italian equivalent, Maccherones, was first reportedly brought to France by Queen Catherine De Medici in the 16th century, who introduced the sweet treat to Europe. To honour the French culinary speciality, The Macaron has made its way to the competition.

The Hindu god Shiva and his spouse Parvati are combined to form the male-female figure known as Ardhanarishvara, which is Sanskrit for “lord who is half woman.” The right side of many sculptures from India and Southeast Asia is decked with the customary Shiva ornaments, whereas the other half is decorated with Parvati ornaments.

Indonesia – The Stpry of Samudra Mantana

This outfit is inspired by the myth of the giants and gods who searched for Tirta Amerta, the fountain of immortality. In order to complete this quest, the gods and giants must stir the sea of ksera, which is shown as a blue dress with dazzling ocean foam. The mandara mountain (mandara giri) must be used for the ocean’s stirring. Hinduism’s four most revered deity dragons – Basuki, Antaboga, Garuda, and Badhawang Nala – are clearly portrayed in this outfit.

Everyone thinks of the kimono when discussing Japan. However, Japan has other lovely aspects. Even if they only wish to show everyone a small portion of it, it cannot be fully described. This national costume is created as a result.

Laos – The Light Ship of Laos

This outfit takes its cue from the Ship Fire Festival, which takes place at the conclusion of Buddhist Lent and features light boats that flow to worship the river. The Wat Phra That Phu Sri Temple in Luang Prabang served as inspiration for the jewellery. As the night shifted, so did the black dress.

Malaysia – The Melody of Borneo

The beautiful musical instrument Brass Gong from Sabah served as the inspiration for this national costume.

The garment is crafted with 100% handmade embroidery and more than 3,000,000 beautiful crystals that embellish and symbolise the gems of Mexican culture. It was inspired by pre-Hispanic Aztec dresses. The clothing features a layer that embodies the best aspects of its culture and a stunning plume that symbolises the majesty of its Aztec monarchs.

This outfit, which was designed after an Inka Empire female warrior, was created primarily to promote environmental awareness out of recycled paper and melted plastic.

Puerto Rico – Guardian of the Bay

The Guardian of Puerto Rico’s Bioluminescent Bay served as inspiration for the Miss Puerto Rico National Costume. The Guardian of the Bay is the name of this outfit. The light emitted by dinoflagellates, which, when in motion, resembles a natural fantasy similar to that in the Avatar film, is represented by this clothing. There are only two regions on Puerto Rico’s Caribbean Sea side that experience this occurrence, which is highly distinctive to the Island of Enchantment.

Thailand – The Fight of Garuda and Naga

Old myth states that Garuda and the Naga were brothers. They were both Kashyapa’s sons, although they were from rival mothers. Even though they are both his sons, Kashyapa once granted Garuda’s mother’s plea for her son to eat the Naga. This resulted in Garuda eating the Naga, and the brothers’ conflict erupted as a result.

The name “Madame” refers to a lady who is powerful, authoritative, and a symbol of societal standards. It is derived from the French term “The Madame,” which refers to female slaves who came to Callao to display their wealth. The Venezuelan outfit is fashioned from more than 30 metres of Guianese gold-colored taffeta fabric and more than 300 metres of ribbons in a variety of colours, including red and golden blue. It also features flowers embroidered in relief with more than 5000 Swarovski crystals and red pearl necklaces.

Miss Vietnam promoted her country’s wet rice farming through the use of this national costume. Golden Grain is a national costume that combines a Four-Body Dress and an Ao Dai form. It draws inspiration from the sun, storks, cranes and rice plants.