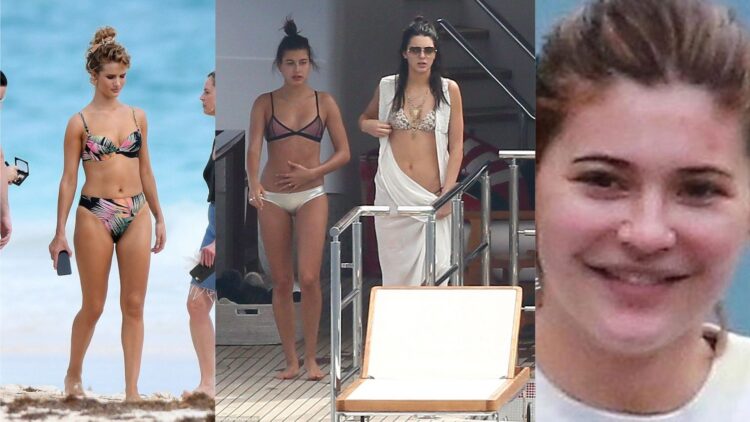 Generally speaking, social media can be a really great place – but it’s also the most deceptive environment there is. Often times, young girls and guys look up to celebrities, models and influencers as their “goal” or role model. It’s not wrong in any way, but sometimes, you have to know when to trust celebrities and when not to – especially when it comes to what they share on social media. Whether you believe it or not (which you will in a second), not everything celebs post is true, in this case, we’re especially focusing on their bodies.

Unfortunately, there is a certain “body goal” that women are required to achieve, and in most cases, these unrealistic and utterly rubbish benchmarks are set by celebrities and influencers themselves. I mean, no hate intended here – if they live a healthy life, then so be it and good for them.

But I think it’s important that normal and regular girls like you and me should be aware that these celebs, models and influencers are paid to look good. Plus, don’t forget the heavy-a** photoshopping and multiple edits and filters that go into these photos before they are released on social media for the world to see and admire. Imma tell you this right here, right now – these people DO NOT look like what they post on social media. You will see why when you scroll down.

So, ready to be taken aback? Here are the side-by-side comparisons of celebs, models and influencers on social media versus reality:

Rosie Alice Huntington-Whiteley is an English supermodel and actress best known for her work for Victoria Secret and being the face of Burberry Body. She is pretty much what “beauty’ means today, and if you do visit her Instagram page, you will see the most beautiful and well-posed pictures that make you stop scrolling. But is that what she really looks like in reality? Hell, nah!

The picture on the left is her in a well-posed manner, with amazing lighting and excellent editing – like what a supermodel looks like on the front cover of a magazine. And then, the picture on the right is when Rosie is not posing and rather slouching like all of us do – you can clearly see there ain’t no flat abs. Instead, she actually has a tummy like the rest of us do. There is no thigh gap and she looks as normal as ever. That photo was taken by an unpaid paparazzo, which means the photo shows her in her natural state. Doesn’t she look just like you and me?

I’m not sure about you guys, but I personally find her extra attractive in the right picture.

Mamma-mia, this momma just gets hotter and sexier as she ages. But, believe me when I say, she doesn’t always look that perfect – like how you see her through your phone screen. I mean, see it for yourself, ladies.

The picture on the left is her in a more posed manner, even while walking, and these photos are often times taken by a paid paparazzo, so the angles and her style were decided before-hand. Take a look at the image on the right – she looks stunning, but you can see that her body looks normal, relaxed and un-posed. Her dress isn’t hugging her perfectly, her shoulders are slumped and she has a thicker side frame – all of which a normal woman has, without the heavy editing.

Britney Spears is no exception. She has proudly maintained her Barbie doll like figure for so many years and has been featured in a number of magazines where she is mostly in a bikini or a body-revealing outfit. Why wouldn’t she, she has an eye-capturing body?

But it’s not always that perfect. The photo above depicts her before and after being retouched. Before, her body is normal, her butt is how a normal one would be, and she even has cellulite around the back of her thighs. And then, there’s the after – which is the result of good photoshop skills. The cellulite is gone and her skin looks rather smoother. This, ladies, is not how a woman really looks like.

The Victoria Secret Angel with the perfect runway body. One would kill to have her looks, and often times, she is portrayed in that manner. Makes me wonder – do these people not have bad days, with bad hair and bad outfits? Of course they do, you just don’t get to see that side of them.

The pictures above, for example – the one on the right is her in her absolute goddess-form, walking down the runway, and you can see that she is fully prepared to show the cameras her best side. Her walk and body posture are perfect, and the camera is loving it.

On the left is an image of her just casually hanging out in a bikini, and truth be told, she doesn’t look all that fabulous. In fact, she looks pretty normal – un-posed, unbothered, no makeup and being in her naturally beautiful state. Gorgeous! She looks just like you and I would in a bikini.

You really thought I wouldn’t do a Kardashian? I am a Kylie Jenner fan, but honey, sometimes, her photoshopping is totally OTT! And the fact that she has a lot of you girls fooled is just crazy. Now, the Kar-Jenners are known for their countless plastic surgeries, all of that face re-shaping and the fact that the whole family’s career started from that sex tape – gotta give it to Kim right there! They have set the curvy look in the beauty industry and featured in numerous bikini photoshoots.

Even with all that plastic and re-shaping, they still need photoshop to look good on social media. What Kylie Jenner posts on her Instagram isn’t what she looks like in reality minus all that makeup, filters and heavy editing.

See it for yourself in the images above! Honey, there’s so much you can do with all that editing software – and these influencers and celebs are acing it.

Another Kardashian. Honestly, Kourtney definitely looks more human than the rest of them, if that sounds right! See the difference between her social media post on the left, and a photo taken by a paparazzo on the right. She looks like two different people.

Cindy Kimberly is a beauty influencer on social media that has quite the number of followers and likes on her pictures. Then again, reality hits, and here is a comparison of what she chooses to show on social media (after the editing and choosing THE picture from hundreds), versus what she really looks like, taken by a paparazzo.

There’s some shocking difference there. This is what happens when you take photoshopping skills in college. Just kidding! I’m not sure if she did, but she is hella good at it. Also, there is nothing wrong in the casually taken photo. As a matter of fact, it’s kind of attractive when she just stands there smiling and living her best life, unbothered with posing for the grams.

Never expected Madison Beer to make it to this list, but here she is. See the vivid difference in her Instagram post as compared to the candid photo taken by a paparazzo. Without the editing, lighting effects, filters, shaping and toning of the body, you can see that Madison Beer looks just like any other girl in town, when her body is normal and relaxed.

No curves, no fake tan, no thigh gap, no slim figure… just Madison Beer as a normal and gorgeous woman.

Bonus Pics of Other Celebs in their Unedited State

You see, ladies – there are tonnes of methods and editing apps that are utilised by these celebs, influencers and models to look exceptionally stunning on social media, sometimes to the point of not looking like what they actually look like. If you stare at these images and wonder what’s wrong with your body, lemme tell you – NOTHING woman! there is absolutely nothing wrong with your body! You ARE beautiful and you are what a WOMAN looks like, so please embrace the flabs and tums, because they do help store all that delicious food you eat!

Celebrity Skincare Brands: The Dope And The NOPE!