Markle’s Miracles: The Duchess Of Sussex’s Most Iconic Looks, Ranked 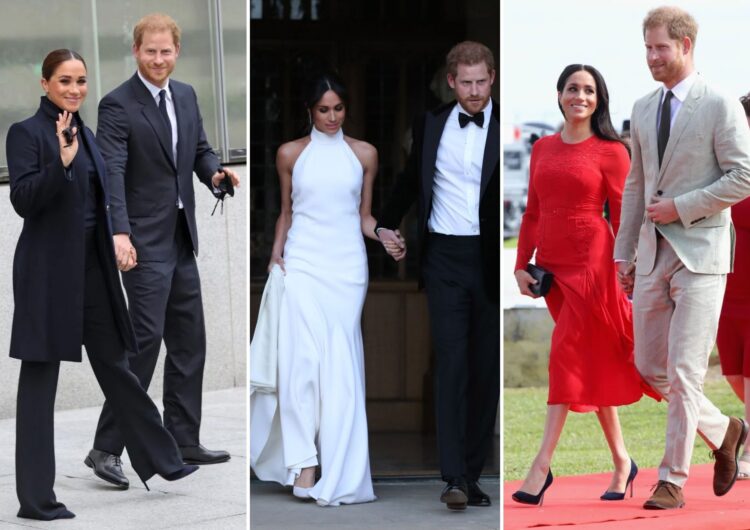 Whether you love or hate her, there’s no doubt that Meghan Markle is as beautiful as her sister-in-law, Kate Middleton, and she wows us in the dresses she wears for any public royal appearance.

Meghan’s outfits were the subject of an analysis conducted by shopping gurus Coupon Ninja, which examined her most memorable getups and quantified surges in global Google searches each time she presented a new red-carpet style.

Here are some of MM’s iconic looks:

The two gowns Meghan wore on her wedding day in 2018, which was televised worldwide, earned first place. The Duchess walked down the aisle in a Givenchy gown created by Clare Waight Keller, with a bateau neckline and long sleeves.

Meghan changed into a custom Stella McCartney classic and comfortable halter neck gown for the reception.

Coming second place is Meghan’s custom Valentino red cape dress, which she wore on a Moroccan Royal mini-tour in February 2019. After photos of the Duchess wearing a ‘red cape dress’ was published, there was a 150% spike in individuals shopping for their own.

Meghan’s classic Scarlett red gown by Carolina Herrera, worn at the Salute to Freedom Gala in New York, took third place. She looked stunning in the gown, which had a plunging neckline, tight waist, and a flowing train. The garment was so popular that there was a 108% rise in consumers searching for Carolina Herrera around the world.

Fifth place goes to Meghan’s trench coat dress by Grace Wales Bonner, which she wore during the unveiling of her and Prince Harry’s first child, born in 2019. The dress was so popular that there was a 222% increase in consumers worldwide searching for trench coat dresses that month.

In 6th place is Meghan’s Jason Wu dress, which she wore at the Lion King premiere on July 19, 2019, barely two months after giving birth to her son. The Duchess of Sussex looked stunning in the long-sleeved black gown, which she accessorised with Nikos Koulis earrings, a Gucci Broadway purse, and a glamorous slicked-back hairstyle.

The Giorgio Armani black silk leaf gown Meghan wore during her shocking interview with Oprah Winfrey in March 2021 ranked 7th. Bath Fashion Museum in the United Kingdom has named the garb “Dress of the Year.”

In 8th place is the ensemble she wore on the red carpet at the 9/11 memorial – an Emporio Armani coat paired with a cashmere turtleneck by designer The Row. To complete the look, this was matched with a dramatic smokey eye.

The Duchess of Sussex donned a monotone red suit by Loro Piana for a royal visit to a Harlem school – and the outfit comes in ninth place on this list. The crimson suit has a slouchy, modern style and was ideal for the season.

Finally, Meghan’s dress worn during a royal visit to Tonga in 2018 comes in 10th place. She arrived in style, stepping off her private jet with Prince Harry and onto a red carpet wearing a vibrant red dress with a matching belt by designer Self Portrait.

More on Meghan’s style? Read this: