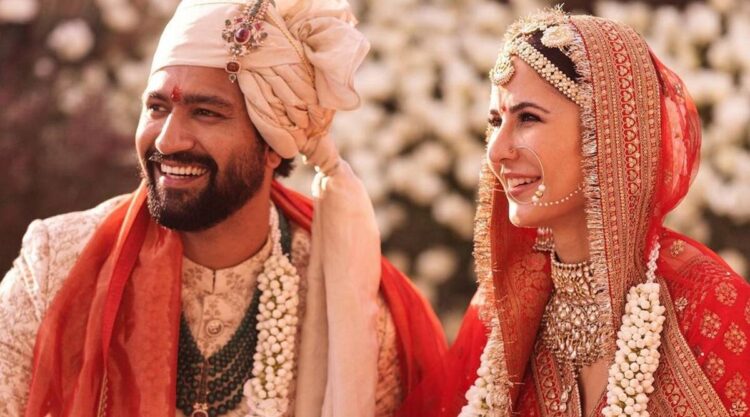 Bollywood bombshell, Katrina Kaif, has married her boyfriend and fellow actor, Vicky Kaushal. The actress, famous for her sensational dance moves, brilliant acting and killer looks, got hitched on Thursday in a private ceremony at the Six Senses Fort Barwara in Rajasthan.

Although it was a highly anticipated big ticket Bollywood wedding, the three-day wedding affair was kept intensely private. Even news of the marriage was kept secret – so much so that the public and media had no clue whether or not the rumoured wedding of the year was going to happen. Media got confirmation about their wedding date and venue from their sources only a week before the wedding.

From a no photos NDA clause to compulsory RT PCR tests for unvaccinated attendees, the entire ceremony was (presumably) a spectacular affair. If reports are to be believed, a total of 120 guests attended the high-profile wedding.

The actors took to their official Instagram accounts to make the announcement and share photos from their nuptials.

Both Katrina and Vicky wrote in the caption, “Only love and gratitude in our hearts for everything that brought us to this moment. Seeking all your love and blessings as we begin this new journey together.”

The couple were dating since 2019, but managed to keep their relationship from the shutterbugs and public eye. They may have never admitted to being in a relationship all those years, but thanks to the scrutiny of the paparazzi, there were occasions when the couple were seen attending parties together, and even going on romantic getaways.

Earlier this year, Katrina cheered Vicky on at the premiere of his film, Sardar Udham, and even penned a note, in which she called him ‘pure talent’. “@shoojitsircar what a vision, such a gripping beautiful film, pure unadulterated storytelling – @vickykaushal is just pure talent, raw, honest, heartbreaking,” she wrote on Instagram Stories.

On the work front, both Vicky and Katrina are basking in the success of Sardar Udham and Sooryavanshi, respectively. Now that their relationship is out in the open, we hope to see more of the couple and them being open about their lives. A movie starring the couple would definitely break all blockbuster records!