8 Effusive Celebrity Dads On Instagram We Wish Were Ours Too 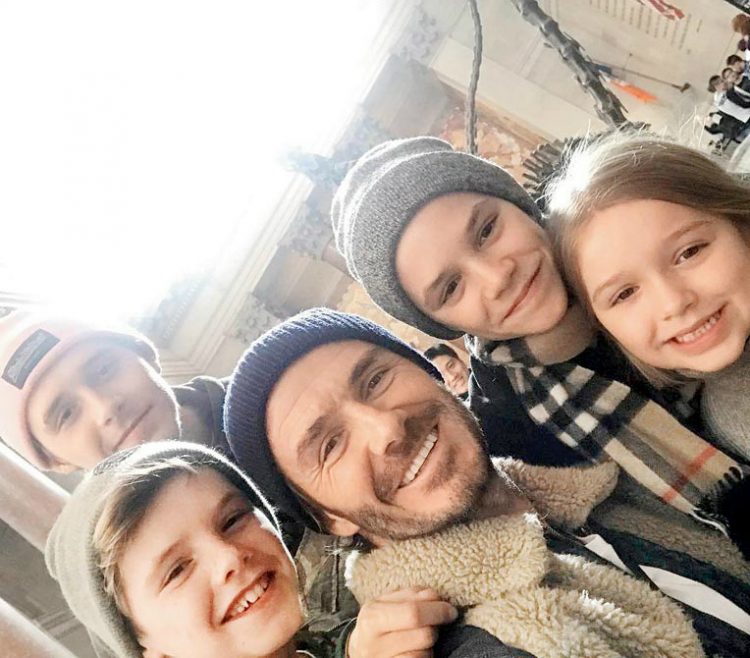 On top of their ridiculously suave looks and insane success, celebrities like David Beckham, Chris Pratt, John Legend and Chris Hemsworth also play another very important role in their lives – being wonderful fathers to their kids. These men we’re about to mention aren’t only proud and happy as dads; they are also effusive about their families, which makes us love them that much more! In the spirit of Father’s Day, we’ve rounded up eight of our favourite celebrity dads on Instagram we wish were part of our family too.

PERFECT Father’s Day with the Fam! Jaden missed his flight. But he’ll be here in the morning. 🙂 🎥: @jas @pursuethedelicious

1. Will Smith – In December 2017, Will Smith started his Instagram account with a duck-faced selfie and barely less than a year later, he has amassed over 10 million followers, though it is easy to see why.

His majorly hilarious posts include pranks played on his wife Jada Pinkett Smith as well as two children Willow and Jaden, aside from clips he’s recorded just to embarrass them, and lots of dancing. He’s definitely a cool dad, not a regular dad.

The moments I share with my children are incredibly special. Whether that's laughing together when they tell me things about their day on the drive home from school, reading one of their favourite books to them at bedtime or spending time together on holiday. Through my work with UNICEF I've met so many inspiring dads around the world. Dads who want to ensure their children have the best start in life and will do anything to give them the support and love they need even when faced with huge challenges. Join me in supporting @unicef and share your super dad moment in a photo or video this Father's Day using #EarlyMomentsMatter

2. David Beckham – There is no questioning this ex-footballer’s sincerity towards his family, comprising Victoria, Brooklyn, Romeo, Cruz and Harper, as it is well-reflected on his Instagram account.

If he isn’t trotting around the globe, he’s spending quality time with his family, writing heartwarming captions about his love for them, and sometimes even gracing us with Snaps and Instagram Stories of himself with them.

Perhaps having two fathers is really better than just one, and we’re pretty sure being adopted by the Harris-Burtka clan will have us set for life.

Not sure what made me more proud: when Jack insisted on holding this barracuda himself, or when he tried it raw! (Barracuda sashimi is amazing by the way) haha!! 4 year olds will try anything! Get out and fish! No better way to share God's bounty with your babies and make life long memories than fishing! Get out on the water! #fishing #fishingislife

4. Chris Pratt – The Guardians of the Galaxy star may have broken our hearts when he announced his split from Anna Faris, but that doesn’t discount the time and effort he puts in for their son Jack.

Happy Birthday Mom!! Love you so much!! I hope you’re having fun, smiling and laughing today! ♥️🙏🎂

His posts include those of him following his son’s footsteps and him enjoying farm life with his family. Sometimes, you just gotta go back to nature to reset, y’know?

5. Justin Baldoni – Where do we even begin with this Jane the Virgin star? Nearly every tear-jerking caption on Instagram he’s written speaks of how proud he is of his wife Emily Baldoni, and his two children Maiya and Maxwell.

Our last family photo on the front porch of the house we’ve been renting for the last three years. So much has happened here. So many memories. So much love. So much growth. I was honestly a bit attached to the house – not because I actually loved it… but because of all that happened in it. I saw my wife go through both her pregnancies here. This is where she gave birth to Maiya. Where Maiya grew up. Where she met her brother for the first time. Where she took her first steps, where she fell off the bed and nearly gave us heart attack’s, where she said her first prayer and where she showed us how huge her heart is by singing her little brother to sleep for the first time. Its where we found out we were pregnant with Maxwell, and where Emily was in labor for three days and like a super hero let go of her attachment to home birth to deliver him at the hospital. This was the home he had his first nights sleep in, and the home he first smiled in. It’s weird to have attachments to material things you don’t own… but that’s life! It happens. But as I think about… none of us really own anything in this life. Even our own lives, as much as we’d like to think they are ours – I don’t believe they really are. It’s been given to us to experience and spread love – just like our children have been given to us to love, teach and set free. So goodbye little small house! We will see you and wave to you as we drive to our new house that’s “almost” finished! Here we go! A new adventure awaits! So here’s to Love and letting go and being grateful for the experiences and memories that have lead to us being exactly where we are today – and to also remembering that home isn’t a physical place, it’s a state of mind …and it really is where your heart is. #dearmaiya #dearmaxwell #home

Another reason why we love him? Through his new show Man Enough, he aims to break down masculinity by debating the limitations and stigma attached to traditional gender roles.

6. John Legend – John Legend and his wife Chrissy Teigen will always remain our favourite celeb couple of all time, though their two children Luna and Miles makes their family that much more enviable.

Happy Mother's Day to my wonderful wife Chrissy. I see so much of you in Luna and I love it so much. I can't wait to meet our little boy and to see you give him so much love and get so much love in return. I'm so happy to be on this journey with you.

It’s safe to say that the majority of his posts on Instagram are about his family, and judging by his feed, they sure do have a good time together, whether it is through cooking, singing or reading bedtime stories.

Day two with my surf coach, she’s like a little angel on my shoulder constantly feeding me knowledge and inspiration and occasionally heavy handed criticism that borders on abuse but I know it’s for my own good (joke) Thank you coach Indi you’re the greatest, love u🤙🤙#familysurftrip @australia

7. Chris Hemsworth – This Thor star who is married to Elsa Pataky isn’t afraid to bare it all and often documents himself with his three children, Rose, Tristan and Sasha, while on daddy duty.

Recently, he even made headlines for hilariously lip syncing to Miley Cyrus’ “Wrecking Ball”, all while dancing along to the hit with his children. Aww!

I’ll handle this business 😉💪🏾 Mama @laurenhashianofficial has her hands full nursing/feeding Baby Tia, so I’m feedin’ mama her dinner. My pleasure. So much respect to her and all mamas out there holding it down and running things. Just landed and good to get all my girl’s settled in. Now, I gotta go satisfy my own appetite.. Iron Paradise, here I come. #EveryoneGetsFed #DaddysGottaGoToWork #ChivalryIsToughOnTheKnees

8. Dwayne ‘The Rock’ Johnson – A quick scroll through Dwayne Johnson’s Instagram feed is enough to capture our hearts. He and his girlfriend Lauren Hashian are proud parents to two adorable girls, Jasmine and Tiana.

He also makes it a point to pen down his appreciation and gratefulness for his little family, which is oh so sweet. He’s a straight up softie and is evidently proud of it.