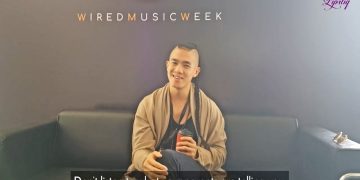 While a small percentage of aspiring young musicians in Malaysia can thank their parents for supporting their dreams, unfortunately for the rest, merely voicing out an interest to have a career in the music industry will probably be as disappointing as it is infuriating to most Asian parents.

The music route isn’t the most conventional of careers, but listen – You can, and you should follow your dreams, because that’s exactly what Morgan Donor, music producer from the famed Australian electronic duo Slumberjack had to face before he moved to Australia and found success in the land down under.

At the recent Wired Music Week (a one-stop hub for music enthusiast to learn, network and develop their skills), we sat down with the Sarawakian-born producer who sports an eccentric Shaolin-style braid, and he enlightened us on his rocky journey to achieving all his successes today.

Read on below to find out how Morgan managed to beat all odds together with his other half, Fletcher Ehlers as Slumberjack:

Q: How did the two of you meet?

We met in Perth, Australia. He won a DJ competition in 2011 and I won the same competition in 2012. Naturally, we wanted to suss each other out and see who’s the better DJ. And not knowing who’s the better DJ, we jumped in the studio about four months after we met and started writing music together. It was so random. We talked to each other and thought, “If we wanted to collaborate, we should do it.” We wanted to put an EP out as a collaboration EP and realised we worked so well together, so.. might as well start at that.

No clue. We never knew it was going to do much. We just thought it was just a one-off EP. The EP isn’t even on the internet anymore because it was so bad. Back then, we were making really down tempo, chill music, so hence the word ‘slumber’. So Slumberjack and then it just kept going and going. We got stuck with the name.

Q: It must be an honour to be signed by Mad Decent. How did that opportunity come about?

I wouldn’t say we got discovered by anyone per se – we got our break in Australia. To be frank, it’s Triple J (the radio station) that really stuck behind us in the beginning, so we have a lot to thank them for. After that, I guess having a radio play our music in Australia, people started finding out about us, so our Soundcloud started doing pretty well. Eventually, Spotify and we got to Mad Decent later on. It was the people who discovered us. There wasn’t a turning point where we went from a nobody to somebody in a day, it feels really gradual for us.

went through my photos and saw this. Till this day he is still, to me, the man that inspired it all also, if you are the one that took this photo, hit me up plssss

Q: What is the most difficult hurdle of having a music career?

Travelling. It’s the flying around. We’ve done probably close to 100 flights since last year and they’re all inter-continental. We do Asian tours, Australian, New Zealand and America. We do those quite often, a lot of flying. We slept in a bus for two months while we went on tour with Troyboi.

Q: How was it like to work with Alison Wonderland and Quix?

Let’s start with Alison. Yeah, I love it. We started working together in 2014/2015. Our first song together was called “Naked” on her first album Run. She’s very talented. She has ideas upon ideas. She’s fast. I’m not as fast as her. I can produce, but my ideas aren’t as flow-y. She’s really intelligent.

And Quix is a super fast producer. So when he’s in the studio, sometimes I just let him run the project. I just sit down, I’ll be like, “You’re way too fast, you just do it. I’ll let you know what I think.” That’s pretty much how our vision came about.

Q: How do you get inspired when it comes to evolving your sounds?

We’ve always liked heavier music like dance, trap, dubstep or glitch hob, but when Slumberjack started, we wanted to do something that’s different so we could get recognised. And we did, so we started the whole Slumberjack project – we did really chill, mellow music but then eventually, the love for harder music started creeping back into our lives so whatever sound that we’re doing started to fuse with the old love we had for harder music. So we make, I guess, pretty unconventional dance music. Also, Fletch came from a glitch hob background and he was already miles ahead of me in terms of production. I learnt a lot from him. I’m from Sarawak and I was really inspired by world music because of the Rainforest Music Festival (which I’ve played at a couple of times), and we decided to get inspired by sounds other than electronic sounds, around the world. I guess that’s how Slumberjack’s sound came about.

don’t you know I’m in a band 📸 @mitchlowephoto

Q: How did growing up in Kuching, Sarawak shape your sounds?

I played classical music for a really long time, since I was 13. I had a really great classical teacher, she’s still in Kuching. I actually had a band with her son. He was playing the violin, I played the piano and we did this whole classical crossover thing, did a bit of pop as well. In terms of how Kuching shaped me, it was the thirst and hunger coming from such a small place. I’ve always wanted to do music but I knew I had to get out and do it somewhere else before I could help people in Malaysia. We don’t have the infrastructure to develop a successful musician.

I remember my family telling me that there’s no money in music. There is no career in music. The only thing you could do is probably play in a pub or club or doing open mics. I guess that’s the idea of music for many Malaysians, or working in a studio for RTM or whatever, or being a radio DJ, someone who hosts radio shows. There’s a whole career ahead. You can be a mixing engineer, producer, songwriter, or jingle writer. You could write music for movies, games, artists and more.

We don’t get that exposure until I went to Australia and now America, and I see music being a really big part of everything. Music literally runs people’s lives. I’ve only met one person in my life who doesn’t listen to music at all, like, ever. I asked what kind of music that you like? And she goes, “I don’t listen to music, period.” And I find that really weird.  I don’t trust that person.

Q: Craziest music festival you’ve ever been a part of?

Splendour In The Grass in Byron Bay, Australia. It was the end of our headline tour last year and that was the first time we actually debuted our live show. So, we don’t DJ, we just started putting out our live show and we ended at Splendour In The Grass. The most epic moment was when we cut the music off and people were singing the words. We had Vera Blue come on stage with us, and there was a point when she didn’t even have to sing into the mic because everyone was singing back the words to our song. That was nuts!

Q: What do you expect to achieve from Wired Music Week and what message would you give to aspiring musicians in Malaysia?

The reason why I wanted to do Wired Music Week is clearly because I’m Malaysian. I wanted to let people know what is expected of them if they want to be a musician in Malaysia or breaking out from Malaysia. I wanted to smash the idea of music not being a career or not being a viable job, and also prep them be aware of the obstacles ahead. And also the romanticising of being a superstar or rockstar. Those things will come later. And yeah, generally helping people out and breaking the stigma.

As for my message to young aspiring musicians: “Don’t listen to what your parents are telling you. Do it. Do it and prove them wrong, and keep learning. Don’t be arrogant, don’t think that you’re better than anyone else, you’re always learning so someone’s always better than you. And don’t quit. Ever.”

Damn, what practical advice. We’re positive many of us can learn a thing or two from Morgan’s journey in music.

In light of this, some of you may be thinking, “Oh, Morgan just got lucky,” or that, “He must be rich” — To you, we present the rest of this writeup.

Through Wired Music Week, aspiring Malaysian musicians of various levels are able to prepare to make their mark on an international scale as the event serves as a platform specially made for music enthusiasts across the nation to grow and network with some of the brightest minds of the industry.

During the prestigious event, we also got the chance to chat with Lok Cheng Tong, the Marketing Director of record label SnakeChambers and Ambassador of WMW, who gave us some insightful details on how the team is paving way for local talents to become as big as Martin Garrix or even Cardi B, without jeopardising their signature sounds.

Like Morgan, the dark-haired beauty shared the same sentiment regarding the level of support given by family members, noting, “There are still a lot of kids being pushed to become a lawyer, doctor — the stereotype thing.” She continued, “You know, your parents will always love you. But they will only support you once you’re an established artist, because that’s when they know that you’re safe.. that you can become successful.”

“But the journey towards success, there’s nobody supporting you. So that’s what WMW stands for. We are the family and friends that support you along the way.” Lok also remarked that you don’t necessarily need to have a musical talent to be a part of the industry, “there’s always a place for everyone in the music industry. You just have to look from mono to stereo.”

Check out the video above to learn more about Wired Music Week’s initiatives.

As things stand now, for enthusiasts who are passionate about music and simply cannot imagine doing anything else in life — don’t lose hope just yet because WMW will be back soon, with bigger plans for music lovers like you.