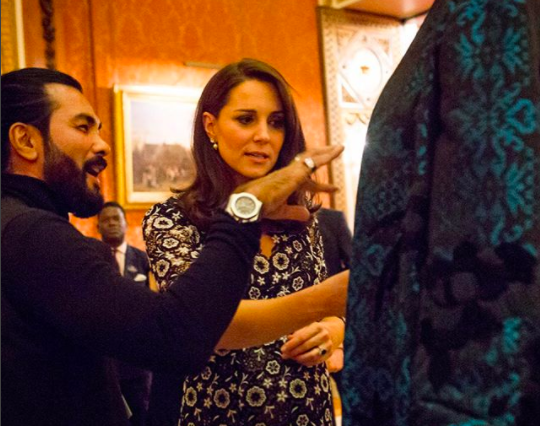 London Fashion Week is in full swing, and this week, Malaysian fashion designer Bernard Chandran has found himself brushing shoulders with the ever so popular Duchess of Cambridge and fashion icon, Kate Middleton, at the Buckingham Palace.

Dubbed as this country’s King of Fashion, the 49-year-old personality was invited to represent Malaysia for the Commonwealth Fashion Exchange, a new creative initiative between 53 countries established to showcase artisan fashion and put a focus on sustainability in the industry.

In an interview, Bernard revealed that he was approached by Eco-Age, the official organiser of The Commonwealth Fashion Exchange to work on a custom-made piece for the exhibition. He shared the news with his followers by posting an image of the exclusive invitation on his Instagram account along with a caption that read, “BUCKINGHAM PALACE”.

We got word that he was the only Malaysian representative chosen to showcase his designs at the reception event, which was hosted by Kate Middleton and Sophie, Countess of Wessex and coincided with London Fashion Week.

SHE WANTS TO KNOW MORE

In another post, the designer who has been pivotal to the recognition and growth of the local fashion industry, unveiled three photos of him conversing with the soon to be mother of three, expressing his excitement with the caption, “SHE WANTS TO KNOW MORE”.

It is apparent that Kate Middleton seemed impressed with his design, a newly mastered geometrical version of the “Kerawang” a.k.a. Malay traditional cut-work that showcases a structured bustier silhouette, treated with modern oriental embellishments. Staying true to the craftsmanship of the brand’s DNA, Bernard complements the floor-length coat with rich elements of fine Songket (royal Malay brocade) as the base material, featuring strong colour combo of royal blue and green.