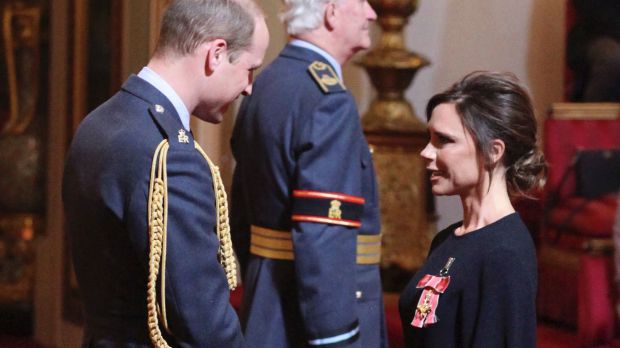 Fashion designer, Victoria Beckham has been named an Officer of the Most Excellent Order of the British Empire (OBE). The former pop star was honoured by her royal friend, Prince William who conducted the investiture on behalf of Queen Elizabeth II at Buckingham Palace.

“I’m proud to be British, honoured and humbled to receive my OBE from the Duke of Cambridge. If you dream big and work hard you can accomplish great things. I’m so happy to share this very special occasion with my parents and husband. Without their love and support, none of this would be possible,” said the star who rose to fame as Posh Spice in the ’90s.

.@victoriabeckham collected her #OBE from The Duke of Cambridge at Buckingham Palace today, for services to the fashion industry. pic.twitter.com/MADflmOjej

Although the starlet previously claimed that ‘fashion stole my smile’ when asked why she seems to be sans smile all the time, Victoria couldn’t hide a wry smile as she was greeted by the Duke of Cambridge to receive her honour.

The designer was supported by her husband David Beckham and proud parents, Jackie and Tony Adams. Victoria’s husband, the former English football captain, was also granted an OBE back in 2003. “It’s great to receive an award for playing football, for something I love doing,” he said at the time.

I want to say how proud I am of my mum today as she received her OBE… She works so hard and really deserves this honour.. We love you mum x ❤ @victoriabeckham

While other members of the Spice Girls have gone on to star in many reality talent shows and promoted weight-loss programs, over the last 17 years, Victoria has gone on to carve out a successful fashion and accessories line, and undertake numerous philanthropic ventures.

I can't thank the #nhs staff who looked after me enough after surgery.. but apparently it's @victoriabeckham that deserves an #OBE For What?

In spite of that, since the news broke, many have taken to Twitter to point out that her fashion label had to be bailed out by her husband in 2014 as it made a loss of $3.75m, despite a turnover of nearly $45m. They certainly doesn’t seem too happy with the recognition and asked whether ‘services to fashion’ is really worthy of an award.

But it seems Victoria couldn’t give a ‘zigazig ah’, channelling her inner Posh while posing for photographs outside the Palace. 😉

With that said, an honour is still an honour. Con