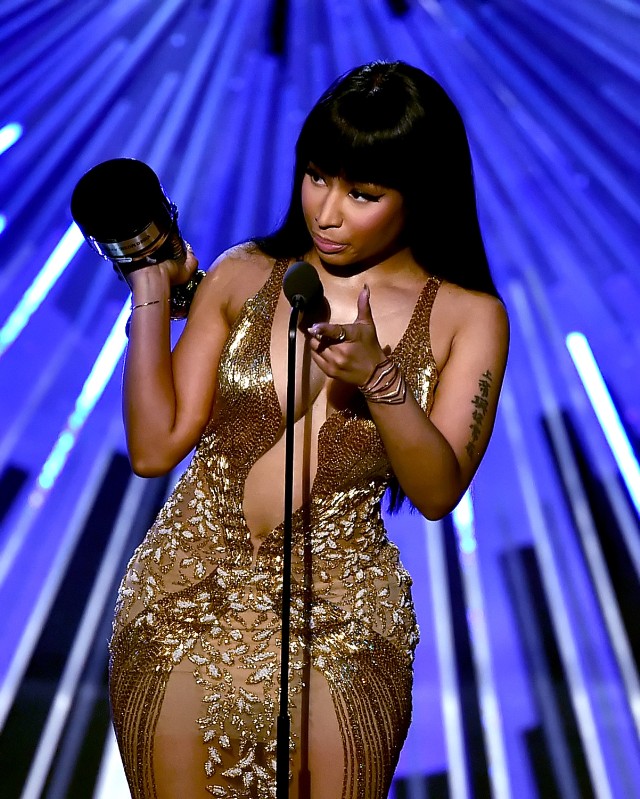 Nicki Minaj is never one to shy away from confrontation. Remember this?

Yeah. “What’s good?” at the 2015 VMAs has become a popular (and relentless) way to properly address a topic long evaded. And now, Giuseppe Zanotti finds himself on the path of Nicki’s wrath.

Back in 2011, Giuseppe Zanotti Designs designed a sneaker inspired by Nicki Minaj (and worn by the rapper on the cover of Cosmopolitan), which was then sold as part of the brand’s main collection. Everything was fine and dandy, until the brand began collaborating with artists like Jennifer López and Zayn on capsules, but reportedly refused to grant Minaj’s wish to design her own range.

This is wonderful. #GiuseppeZanotti seems to think it's ok to name his sneakers after me but his PR says they won't take our call. Lol.

Minaj recalled that when they met years prior, Zanotti told her that she had “inspired him to design a sneaker” in her honor. “Recently when he gave other artists capsule collections, my agency reached out and was told they’re not taking our call,” she tweeted.

But the luxe brand continued selling its Nicki sneakers, which Minaj viewed as yet another example of designers feeling “inspired” by Black women but not giving them a platform for their talents. Also, she was surprised by the mistreatment, especially since it pertained to a designer she worked with frequently. So, she asked in good faith, #GiuseppeWhatsGood?

#RunMeMyCHECK #GiuseppeWhatsGood I got time today. 😊 barbz trend this cuz he gon learn today. The racism & disrespect won't b tolerated.

She even started a poll asking her followers whether the luxe label should pay her or, well, pay her. However, the rapper was quick to note that this is not about the money. “It’s just the disrespect,” she clarified. “You’re not taking MY call? Lol. Give some money to charity in my name or something.”

“U know what I gotta go,” Minaj later tweeted. “My phone ringing. Tell Floyd, Fif & Mike Tyson to book me for the next fight. Me and Giuseppe. after cb & Draco.” So far, neither Minaj nor Zanotti has come forward to comment and we will update our story as soon as we hear back.

Until then, let’s just relish in all the savage bad-assery that is Nicki Minaj.