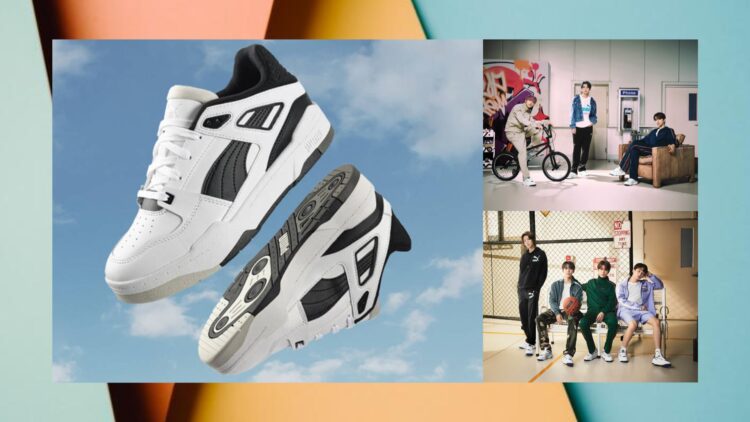 With a new iteration of their “Slipstream” sneaker, PUMA is going retro. In order to help basketball players, the sportswear company initially introduced the shoe in the 1980s. Now, in 2022, the design has been revived with a contemporary twist.

35 years after its first release, PUMA pens the latest chapter in the saga of the iconic Slipstream. This summer, the storied Slipstream makes its return in a plethora of colourways and makeups. Available for both men and women, the sneaker has an undeniably clean and modern look with its silhouette tooling and upper/midsole design.

The Slipstream Campaign with NCT 127 depicts the theme of traveling back in time to the ‘80s when the shoes first debuted. The campaign goes for a vintage street concept, featuring graffiti walls, old cars, and street shops that recall the spirit of that time. Eight members of NCT 127 are featured in the campaign with the exception of Yuta, who was unable to participate in the photoshoot after testing positive for COVID-19.

As part of the campaign activation, PUMA Malaysia has prepared an exciting gift-with-purchase for consumers. Exclusive, limited edition NCT 127 photocards will be given to consumers who purchase the new Slipstream sneakers on a first-come first-serve basis. More information will be shared at a date closer to the Slipstream release.

PUMA announced NCT 127, a Korean K-pop group under SM Entertainment, as its APAC Ambassador on 25 July 2022. NCT 127 will actively participate in fifteen different APAC countries, starting with the Slipstream Campaign.

Officials from PUMA Korea stated that the Slipstream is an iconic sneaker that best depicts PUMA’s sports heritage, and they have high expectations for their first campaign with NCT 127. With the reinterpreted modern design, PUMA Korea hopes that the Slipstream, which is suitable not only for basketball courts but also for lifestyle and street fashions, will be embraced by more and more consumers.

The new Slipstream will be released on PUMA.com, at PUMA stores and retailers (JD Sports, Foot Locker Malaysia, USC Fashion, Royal Sporting House and Sole What) on 15th September.

More on PUMA? Read these: